The Forest, Eroded, and Serrated hingeback are all common names used for Kinixys erosa.  This species is native to the tropical forests of west and central Africa.  While the range of this species is more extensive than Home's hingeback (K. homeana), it is much more rare in the U.S. pet trade.

This species obtains larger sizes than K. homeana, and can be distinguished from it by two main characters:

In addition, the scales on the front feet of mature K. erosa are larger and more rugged than those on K. homeana, and the coloration of K. homeana tends to be more of a chocolate/russet brown color.  In general,K.erosa tends to be the more striking, impressive tortoise.

Kinixys erosa in the Scientific Literature

The article above is a scientific assessment of the conservation status of Kiniys erosa in the wild.

Here's the abstract, a summary of what the scientists present in the article:

The Forest Hinge-back Tortoise, Kinixys erosa (Family Testudinidae), is a forest tortoise with considerable range over the continuous Guinea–Congo rainforest region in West and Central Africa. It is a medium-sized to large tortoise, with a carapace length reaching ca. 400 mm, and males larger than females. Tortoises of the genus Kinixys can close themselves entirely within their shells through a unique posterior carapacial hinge. Kinixys erosa inhabits the lowland evergreen forest, marshy areas, and forest galleries growing along rivers and streams, where it is locally threatened by clearance of forest for cultivation and hunting pressure. It has an omnivorous diet, with mushrooms being predominant. Population sizes are strongly depressed in areas where these tortoises are actively hunted by human populations. The main threats for this species include subsistence hunting by local people in desperately poor economic conditions, agricultural and industrial expansion with deforestation, and trade for the pet industry. There is a strong need for more field research on K. erosa ecology, abundance, and status. There are no known conservation actions for this species; however, there is a need to establish protected areas that include viable populations of these tortoises through their natural range. 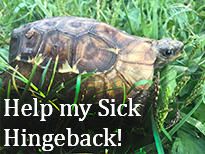